Quality prevails. This is testified by countless satisfied customers all over the world. Here you find a selection of references sorted by product, country, field of application or building type. This is a randomly chosen reference for a first impression: 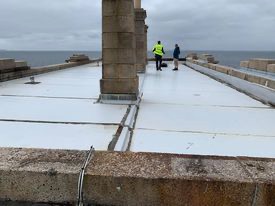 The Ardnamurchan Lighthouse Trust were renovating the inside of the building and wanted to guarantee that it would remain watertight, with the existing PVC roofing membrane showing signs that it was near the end of it’s serviceable life. They contacted Kelvin Donaldson of Gilberts Architects - who have worked with them for over 20 years. Koster Aquatecnic were brought in to advise on an overlay re-roofing for the existing build-up.

Due to the coastal location in the highlands of Scotland it was imperative that we took all required steps to ensure that the applied solution would cope with intense winds of up to 170mph.

The structure of the existing roofing system comprised of a timber joisted deck surrounded by pink granite parapets. The timber deck was covered with a rigid PIR insulation topped with a PVC single-ply membrane.

Had the pull-out tests shown that the timber deck was too weak then the whole roof would have needed to be replaced rather than overlaid with the Koster TPOs, however the pull out values exceeded all expectations meaning we could continue with our original plan.

Guided by the wind-load calculations and pull-out tests: we went with Eurofast Tube fasteners as they don’t promote cold-bridging, and therefore wouldn’t interfere with insulation values. The Tube Fasteners were specified at 250mm centres along the membrane overlap, with the final fixing into the wooden deck made with timber screws.

We supplied a variety of different forms of our TPO: using fleece-backed for the main deck areas, our standard reinforced TPO for use on the upstands, and the unreinforced membrane for all of the detailing, providing increased conformability.

Koster TPO metal laminate sheets were cut and bent to form drip edges and terminations around the perimeter of the building, with Koster Waterspouts used for drainage through the parapet.

Using a 600ml caulking gun, Koster PU-Flex 25 was gunned into the raked out mortar joint then rounded off on the joint face. After the sealant had cured, Koster Repair Mortar plus was mixed with water and SB Bonding Emulsion with a 40mm x 40mm concave fillet installed over the PU-Flex 25. Facade Cream was then applied to hydrophobe all of the stonework including the granite chimney stacks.